Day 1. Delhi Arrive
Delhi by international flight. Meeting and assistance on arrival and transfer to the hotel. Check-in time is 12 Noon. Overnight.

Day 3. Delhi - Agra drive
Breakfast at the hotel Around 1000 hours, drive to Agra and on arrival, check-in at the hotel. Rest of the day free. Car at your disposal.

Day 4. Agra
Morning sightseeing tour of Agra. Agra, the home of the immortal Taj Mahal, the inimitable poem in white marble is the first expression of love of an Emperor Shahjehan for his queen Mumtaz Mahal. This great monument was completed in 1653 AD. Agra Fort, the imposing structure on the banks of the river Yamuna is replete with priceless examples of craftsmanship in the Mughal period, including the beautiful pearl Mosque, it was designed and built by Emperor Akbar in 1565 AD. Tomb of Itimadd-ud-Daulah built between 1622 AD by Empress Nur Jehan, in memory of her father, Ghias-id-Din Beg., it is considered a precusor of the Taj Mahal. Extensive Tiger Tours of India

Day 5. Agra - Ranthambhore drive
Morning drive to Ranthambhore visiting enroute Fatehpur Sikri. Fatehpur Sikri, the birth story of this beautiful city is interesting. There, in a grotto in Sikri, lived a Muslim Saint , Sheikh Salim Chishti by name. Akbar hearing of his renown, asked of the blessings of a son, and when a son was born, not only was the child named Salim, the site for a mighty and ambitious project - a city - was chosen near the residence of the saint erected in k1569. The shortage of water lead to the desertion of this city. Visit the mosque of Salim Chishti, Panch Mahal and other Palaces.

Day 6. Ranthambhore
Morning and afternoon jeep safari to view wildlife. Main species found: Tiger, panther, hyena, jungle cat, civet, sambar, chital, nilgai, bear, wild boar, partiridge, green pigeon, red spurfowl etc. Surrounded by the Vindhyas and the Aravalis, amidst vast, arid and denuded tracts of the desert ecology of Rajasthan, lies the oasis of biomass, the Ranthambhor National Park, spread over an area of 392 sq.kms. of dense forest with nullahs and waterfalls. The herbivorous population includes chital, sambar, blue bull and chinkara. Sambar deer is the pride of the park. There is no other park in Asia, where these largest of all Asiatic deer can be seen so frequently during day-time. Wild boars and langurs are a common sight. Among the reptiles, crocodiles can be seen basking in the sun near the lakes. The tiger is the biggest attraction of this park. According to naturalists, Ranthambhore is one of the best parks in the country for observing and photographing the activities of the tiger. Other carnivores in the park include leopard, hyena, jackal, fox, caracal, jungle cat, sloth bear and ratel. The park nests more than 300 varieties of birds. Common birds seen in the reserve are peafowls, parakeets, doves, partridges, storks, egrets, flycatchers, eagles and owls. Meals and overnight at the hotel.

Day 7. Ranthambhore - Jaipur
Morning and Evening Safari and board even Train to Agra.

Day 8. Jaipur
Morning excursion to Amber Fort, set in a picturesque location. Amer is a fascinating blend of Hindu and Muslim architecture. Built in the 16th century by Raja Mansingh in red sandstone and white marble, the palace complex has some very interesting apartments. Jai Mandir, Sheesh Mahal, Sukh Niwas, Ganesh Pol and Temple of Kali are some of the prominent areas of interest. Elephants are provided to ascend the fort to visit the complex. Afternoon sightseeing tour of Jaipur. Jaipur, this city was built by Maharaja Jai Singh, the notable astronomer 260 years ago. Visit the Maharaja's City Palace, the home of the erstwhile royal family, the Observatory, Ram Niwas Gardens, Hawa Mahal or the Palace of winds built in 1799 by Maharaja Sawai Pratap Singh and drive past the old part of Jaipur city

Day 9. Jaipur - Delhi
After Breakfast check out hotel and drive to Delhi and evening drop to the New Delhi Airport .

Ranthambhore is one of the best parks in the country for observing and photographing the activities of the tiger. 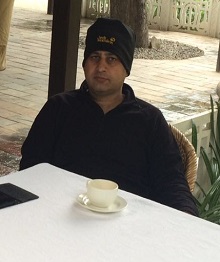 Romance Etched in Stone A Heritage walk among Temples of Bhubaneswar

Designed with in Delhi, India